Jennifer Staubach Gates Has No Soul 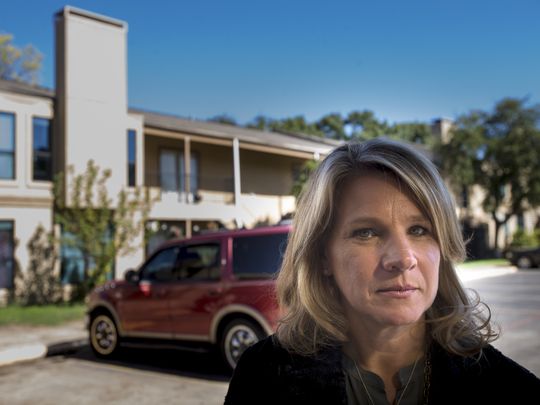 Much like the rest of the City of Dallas, Westhollow’s streets issue is dire.  I have had many conversations with the community in Northwest Dallas about our streets and everyone is frustrated and unhappy with the city’s response. I took it upon myself to meet with one of Westhollow’s City Council Representatives, Jennifer Staubach-Gates a

Much like the rest of the City of Dallas, Westhollow’s streets issue is dire.  I have had many conversations with the community in Northwest Dallas about our streets and everyone is frustrated and unhappy with the city’s response.

I took it upon myself to meet with one of Westhollow’s City Council Representatives, Jennifer Staubach-Gates a few months ago regarding several issues facing our area but the top of the list were our streets.  I went with someone from a neighboring area to speak with Mrs. Gates about this issue.

After waiting patiently to be called in by Elizabeth, whom was Mrs. Gates’ assistant at the time, we were lead to her office.  Mrs. Gates remained behind her desk, barely reaching over to shake my hand, and instead shook the hand of the neighbor I brought to the meeting with me.  I was immediately struck by her sour and defensive demeanor.   Despite this, I remained cordial and calm as I presented my case to Mrs. Gates.

Of course, I had requested the city repave and/or repair our street for years and they refused to do any significant repairs.  They patched here and there or they did a skim coating that quickly, as in weeks, disappeared.  However, my requests had gone largely ignored as well as the numerous requests of those in our area.  I even presented a petition to the city signed by around 300 in our area demanding that our streets be repaired  and they still refused to even address the issue verbally or in action.

“So, our streets, as you know are horrendous.  We have been told for years that our streets would be repaved and repaired but that has not happened.  Why not?” I asked.

Her response to my question was the same that it has been for her entire tenure in office, as well as by her predecessor, Ann Margolin – a canned response: “There’s no money to fix the streets.” she said.  I pointed out that the city had spent billions on a bridge and was about to construct another.  “Well those funds were allocated for that purpose and the funds must be used for the purpose they’re set aside for.” Jennifer explained.   “Like the funds were allocated to repave and repair our streets in the 2006 and 2012 bond elections?  However, nothing has been done to the majority of the streets in our area of Dallas.  However, I have noticed that the streets in Preston Hollow are gleaming.  Where did that money get “allocated” to?”, I responded.

Mrs. Gates’ already sourpuss expression seemed to somehow manage to grow even more distorted as she made it clear that it simply wasn’t going to happen.  She did refer us to her assistant Elizabeth to determine when our streets were on the inventory for repair.  My street and alley were still on the list but they had been on the list for 9 years and had never had anything significant done to them.  Despite the fact that our alley, and those of many of our neighbors have streets and alleys that are crumbling so bad that they appear to be gravel rather than concrete in many places, holding water after a rain to increase the chances of West Nile disease, making it impossible for some streets to  have alley trash pick up the way our neighborhoods were designed therefore relegating trash bins to the front of the houses,  it did not move her to offer a solution to the issue.  I decided to recount to her a personal story that had recently happened in August of 2015 in hopes she may help to come up with a more immediate solution.

“Well, my husband (I could see her expression judgmentally shift in response to my gay marriage) was walking across our street when he was outside and tripped and fell backwards and broke his elbow and fractured his ankle because the street is more than 5″ higher than the street level side of the curb after having been patched dozens of times over the years. ” I told her. 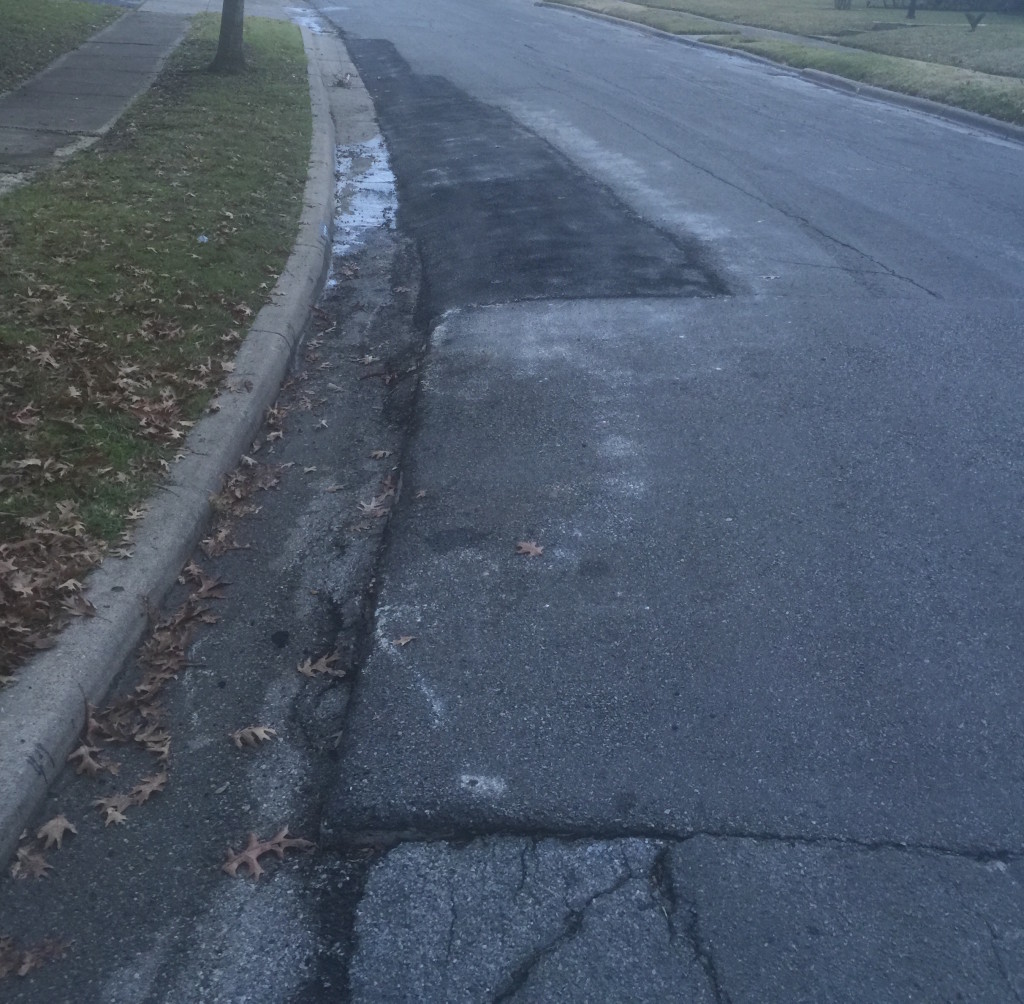 You can see where they patched the street but neglected to remedy the issue where the street is 4-5″ higher than the gutter.

I wasn’t expecting Jennifer Staubach Gates to dramatically get up out of her chair and call the Mayor (another useless civil “servant”) to solve our issue at that very moment but I was expecting some common human decency.  Instead, Jennifer Staubach Gates actually quickly covered her smiling mouth and snickered!    I was appalled that this woman, who has absolutely no experience in government and got her position by riding on the coattails of her famous maiden name, and had made absolutely no effort to fix the oversights by those before her on this issue, would dare laugh at me, a citizen who pays her salary and whom she is to at least consider, and find amusing the suffering of a citizen due to the negligence of the city.

My husband had to go to the emergency room and was in severe pain for weeks after the incident.   She said that the City Manager was responsible for the budget or that there was no budget for the streets or that it would be addressed in a future bond election.  She continually gave us nothing but excuses for her own ineffectual supervision of this issue.

It became clear to me that this woman has absolutely no interest in helping the citizens of her district, primarily in the Westhollow area – or in other words, West of Midway.  She is self-serving and unaffected by the needs of the people in her district.

Many weeks later, after I told her new assistant that I demanded something be done about the condition of our street or else we were suing the city for negligence,  I received an email stating that they would be out to repair the street within weeks.   Indeed, they DID eventually come out and patch the street, but they patched a small area and not the area that was the tripping hazard that caused my husband to fall and break his bones.

I responded to them and told them although I appreciated the effort, the issue was still there and had not been taken care of as it hadn’t changed the issue.

I received a canned response from the city:

Per our previous email conversation: On December 31, 2015, routine maintenance repairs have been completed in front of [sic] your home.

Your street is currently on the 2007 Need Inventory list to be considered for Street Reconstruction, which means your street has been placed on a list along with other street that’s graded in “D” or ‘E” condition (very poor) until funds become available. The Department of Street Services is focused on the mission to provide effective maintenance and repair service for the streets and drainage infrastructure with the City.  Construction work to the streets in Dallas are performed by many entities.  Basic street repairs to potholes and pavement breakdowns are considered as routine maintenance and are performed by Street Services.  More extensive damage to streets is evaluated to determine if reconstruction or resurfacing is recommended.  This is administered by the Department of Public Works.

The City of Dallas tends to have bond programs every 4-6 years and the next one is being considered for 2017. Keep in mind that this street/alley improvement competes with many other projects for funding, however, a petition project usually receives further consideration. If its approved it will take at least 14 months after a bond program approval for construction to start as these type projects require an engineering design as well.

If you have any questions or concerns please call or email me.

So, after being on the “list” since 2007, and passing 2 bond elections since then for this very purpose, our street and the streets of MANY of our neighbors are STILL in dire condition and evidently a hazard.  They refused to respond to recent requests for updates on the streets.

As I wrote about Jennifer Staubach Gates when she was elected, don’t count on Jennifer Staubach Gates to do anything for you unless you live on her side of Midway or can do something for her campaign.  Don’t be surprised if she laughs at people’s misfortune, especially if  you’re gay, hold a civil servant accountable for their own ineptitude, or you’ve managed to expose her own inhumanity.  I guess I can take solace in the fact that I did not vote for her the first time.

It seems nothing will be done any time soon about the hazardous and ugly conditions that exist and have existed in our area for decades.   Drive and walk at your own risk, Westhollow, as the next person who falls, could be you.